As an Amazon Associate I earn from qualifying purchases made on my website. if you make a purchase through links from this website.

Maize farming in Nigeria has been on the increase for the past decades mainly die to the high demands on it as raw material for industry use.

I want to use this opportunity to welcome you Farmers Guide, home of best guide and practical steps in Farming.

Today we will be taking our time to discuss and review many practical steps used in maize farming.

Maize popularly know as corp in Nigeria has been in use for many centuries. Its one of the must used and known stable food in the world after rice.

Over the years, there has been continuous increase in the consumption of maize by individuals and the use by industriesas raw materials for many products.

For this very reason there is need for increase production of the corn to meet the market demand. The market of maize is now ripe for many to rip from. So you can venture into maize farming because it is a lucrative business.

Before we move into the best practical ways or steps of farming maize, let us see while it is a lucrative business in Nigeria.

Since Africa has high maize consumption, anybody would think that they would also have high maize production rate. But on the contrary, it has about 7% production of corn.

In Africa, Nigeria tops the countries that produces corn with over 10 million tons and followed by South Africa. The United States of America has the highest production rate of over 300 million tons.

This show that Africa is relying on importation to meets its need of maize. Since there is High demand for maize in Nigeria and other African countries, going into maize farming is a very good business since there is market for it.

In Nigeria too, there are many variety of maize grains which anyone can plant. Some are good for early stage planting while others are for late maize farming.

Maize is one of the best grown grain in the middle and northern belts of Nigeria and this is due to the moderate  sunshine and adequate  rainfall in this part of the country. The other aspect of this farming too is the storage where if not care is taken, pest will attack it and destroy it upto 100%.

When compared to rice farming in aspect of land or soil type for planting, maize is better since it can be planted in different types of soil, almost all types of soil can grow maize.

With improved maize seedlings and mechanized farming, commercial maize farmers in Nigeria harvest large cops which translates to much maize grains. With proper farming techniques, a farmer can get 10.2 tonnes per hecter.

We will go into the varieties of maize in Nigeria and when you need to plant them for maximum yield.

Let us now move into maize farming in details. We will be following it step by step so you won’t miss the stages.

The list of stages on Maize farming in Nigeria are;

There are many varieties of maize in Nigeria that anyone who is interested in planting maize for commercial purpose can use. The need to select a good maize type is important because you need high yield in other to make a good profit not loss.

Furthermore, different varieties of maize has different characteristics which makes them unique. Some maize are good for planting during the raining season while others are good for dry season.

Some maize can withstand some virus or pest and drought resistant etc.

Some maize varieties are;

These maize seeds has good resistance to heat and disease.

The choice of land in Maize planting is very important

Though maize farming can be carried out in any part of rhe country and land, there are still some soil type that should be used for maximum yield. This ideal soil can be sandy loam or loamy soil.

It is very important for the land made for maize farming that it is well prepared to enable to germination and growth of the maize seed.

The land preparation can ne carried out using many ways. It can be done in the traditional way by using hoe and cutlass to remove the weed and till and plow the seed bed.

It can also be done mechanically using machines like tractors and bulldozers, planters and other equipment used in maize farming.

When the land preparation is being done, care should be taken so as not to deplete the soil nutrient by removing the top soil. Instead, the plant residues on the maize farm should ne turned over to decay and rurn into manure for the benefits of the crop.

Remember that immediately after the land preparation, planting should commence.

The next stage in maize farming after the land preparation is planting. Since most of the maize in Nigeria is dependent on rain, it is advisable that maize farmers should start planting as early as possible. This important due to the facts that rain fall is not to be trusted. So early planting is recommended.

There are two maize farming seasons in Nigeria,

The farmers who practice early season maize are mostly those from the southern Nigeria. This is becaof the early rainfall in this region of the country.

Early season planting is usually done by the middle of March to beginning of April. So the land preparation must have started earlier to meet up with is timing.

The season planting are always done in the Northern part of the country. Maize farming here is done by Mid-June to early August. Though this May something have a large yield but the Farmer must be ready to provide other source of watering it is need be. This can ne done through irrigation.

Nigerians also known for dry season planting. To most of the commercial maize farmers in the Northern Nigeria, this type of farming is the best for them. It has been recorded to have high yield compared to others planted in the raining season.

Irrigation facilities are available to those who want to go into dry season maize farming in Nigeria. This is often provided by the Nigerian government in the Northern Nigeria where this type of farming is done mostly.

Different irrigation methods are applied depending on the farmers choice. You can go into sprinkler irrigation and drip type are mostly used and the best too for maize farming.

Some too also choose to use rain guns. Any of the irrigation application method you choose must supply enough water to the farm for maximum output.

Note: For an encouraging yield, i will advise you to plant only hybrid maize seeds. Don’t just enter the market and get any seed you saw in the market and plant.

Another aspect of maize farming that determines the amount of output you have is the population of the seeds on your farm. It is good that your plants are well spaced about 25cm to  27cm apart.

In a hecter of land, you are expected to have 50,000 maize plants for lucrative output.

As a commercial maize farmer, you need to keep weeds out from your farm. Weed can make you loss your maize yields up to 40%. You should also note that weeds can consume the soil nutrient and water that the maize needed to grow, so it must be free from your farms.

It is very important that during the early stage of the maize, about the 1st to 3rd week, no weed should be found in your farm. This is because this period is when the maize need not to be attacked and rhe early stage of its growth.

Also, pests and diseases are carried by many weed and it can be transferred to the maize and this will be a great loss to you as a farmer.

Ther are many methods of controlling weeds on the farm. It can me manually done but not advisable for commercial purposes but the use of chemicals.

This herbicides used in weed control might be post planting or pre-planting. Any of them serves well in controlling weeds on the farm.

Fertilizer application is one of the best means to having a profitable business in Nigeria. Most persons might suggest the application of only organic fertilizer, but for a large yield, you need both inorganic and organic.

Maize is a crop that need high amount of nutrients and you need to supply them to the farm. In a hecter of maize farm, about 15 bags of 50kg NPK and Urea fertilizer is needed.

When applying fertilizers on the farm, it should be covered. Other supplement that can be added to the fertilizer is potassium humate, rice husk etc.

This is anothe stage in maize farming that must be taken seriously. If not properly handled, pest and diseases might destroy your corn farm. There are many pesticides you can get in the market that controls pest, use any of them wisely for this purpose.

Army worn is one of the many pest that has caused huge loss to Farmers who do not take pest control very serious. So use any of the pesticides you are recommended to prevent this pest.

Acaricides, nematicides, pesticides, fungicides, insecticides and rodenticides are all used in pes and diseases management.

Most of the pests and diseases  are downey mildew, rust, leaf blight, stalk and ear rots, leaf spots and maize streak virus

In any of the maize farming season, maize matured between 3 to 4 weeks after planting. So you should be ready to harvest themat this period.

Depending on how you want to market tou corn, either as fresh corn or dried one, you choose. Any of the above is good. Bit remember for you to make it selling  the corns fresh, your farm need to be located near a large city where you can sell them quickly.

Harvesting of maize can be done manually using hand or by machines like harvesters.

After you must have done with your harvesting, especially if you want to practice dry maize selling, you have to store you maize up for drying amd after drying for marketing. Any of this stages must be protected from pests, rodent and weevil.

You need to store you maize on bags with the room temperature above 30 degrees.

The best storing facilities for maize id the silo. This is a vertical cylinder designed for save keeping of grains before planting or selling.

Downy mildew is an infection that attacks most maize plant near me and other places in Nigeria.

This infection attacks the maize leaf turning them into Brown or yellow thereby reducing the rate of photosynthesis and as such reduce yield.

This is prevented by applying foliar fungicides and metalaxly.

This diseases causes the rusting of maize cops. 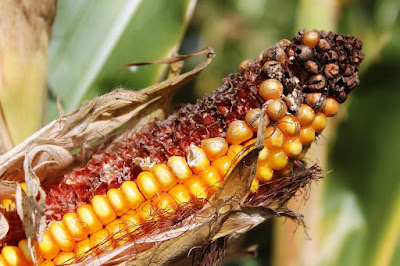 The foliar application of any fungicide like Diathane or other suitable ones.

This is another fungi diseases causing great loss to Farmers.

Trichoderma biofungicides are used to prevent and treat this disease.

This insects also causes loss to maize farmers in Nigeria. It can be prevented by applying cholopyriphos and carbofuran.

This insect can destroy a mazie farm within days. The application of Tihan, Ampligo and other insecticides are advised.

About the Author: Eze Ogbonnaya Harris

Can I bring my family to USA on a student visa?

How to balance work and school in college

Is it illegal to date your professor?

Can I improve my chances of winning easy scholarships?